DDR5 RAM: Our guide to understand all the fuss


Is DDR5 RAM a revolution or an evolution? What are its differences from DDR4? Is it worth upgrading to DDR5?

DDR5 RAM is making headlines in the tech media as the next generation of Intel CPUs, Alder Lake, will land with a new platform, socket, motherboard and native DDR5 support. But what are the differences of DDR5 RAM compared to DDR4. And do you have to rush to buy DDR5 as soon as it is released. We explain all this to you and no, don’t buy now!

The differences between DDR4 and DDR5 RAM

It is an organization called JEDEC that sets the standards for RAM and in July 2020 it released the final specifications for this new memory. The details are very technical and to be honest there are only a few things that interest us that have been summarized in the table below.

Although the terms seem complex, they are easy to understand. The maximum matrix density indicates the number of memory modules that can be put in a single strip. In DDR4 it was 16 GB and with DDR5 RAM it goes down to 64 GB. So yes, you can buy a single memory stick that will have 64 GB of RAM! So with twosticks, you can reach 128 GB of RAM while it is only 32 GB with DDR4.

But beware, at the launch of DDR5, the manufacturers will not directly offer 64 GB per stick. This is the maximum standard. However, this opens up enormous possibilities for machines requiring large amounts of memory without going through Threadripper-type workstations.

Another big difference is that the frequency, therefore the data transfer goes from 3200 MHz to 6400 MHz. Double ! And you can even tell me that in fact, you can have DDR4 memory at 3600 or even 4000 MHz. Yes, DDR5 RAM has a 6400 MHz guideline, but you can expect a much higher frequency once manufacturers embrace it fully. And although DDR4 is already very fast, it is slower compared to the evolution of CPUs and graphics cards. So JEDEC has set the bar high so that we have some leeway.

RAM will have DDR5 a longer lifespan than DDR4 and DDR3 (we are talking about the standard here). The latter two had a lifespan of about 7 years each. By boosting the specifications, DDR5 could well equip our PCs for the next decade and beyond.

Another more technical feature of DDR5 RAM is that a single stick uses two communication channels for a total of 64 bits. DDR4 also sent 64 Bits, but on a single channel. Using parallelism allows DDR5 to have less latency and “look” like it’s faster. Give the impression, because the amount of data sent is the same as DDR, but it uses two channels simultaneously.

DDR4 required 1.2 volts while DDR5 RAM will use 1.1. So more powerful components while being more energy efficient. The energy cost of PCs is increasingly important and it is a technological feat to be able to double the frequency and quadruple the capacity while reducing power consumption. It’s 0.1 volts, but it’s still taken.

The disadvantages of DDR5

DDR5 RAM seems like a major evolution in memory, but there are also downsides to this surge in speed. The first is that the design of motherboards will have to change drastically to accommodate the high frequency. And the more data that is transferred, the greater the risk of error in its integrity.

DDR5 has built-in error checking mechanisms, but early DDR5 strips are likely to have flaws as was the case with DDR4. Despite a lower voltage, the power consumption will be significant, simply because there is more data transferred. Therefore, it will be necessary to double the protection mechanisms, in particular concerning electrical interference and overvoltages. Roughly speaking, on entry-level motherboards from dubious brands, the use of DDR5 RAM could be catastrophic. 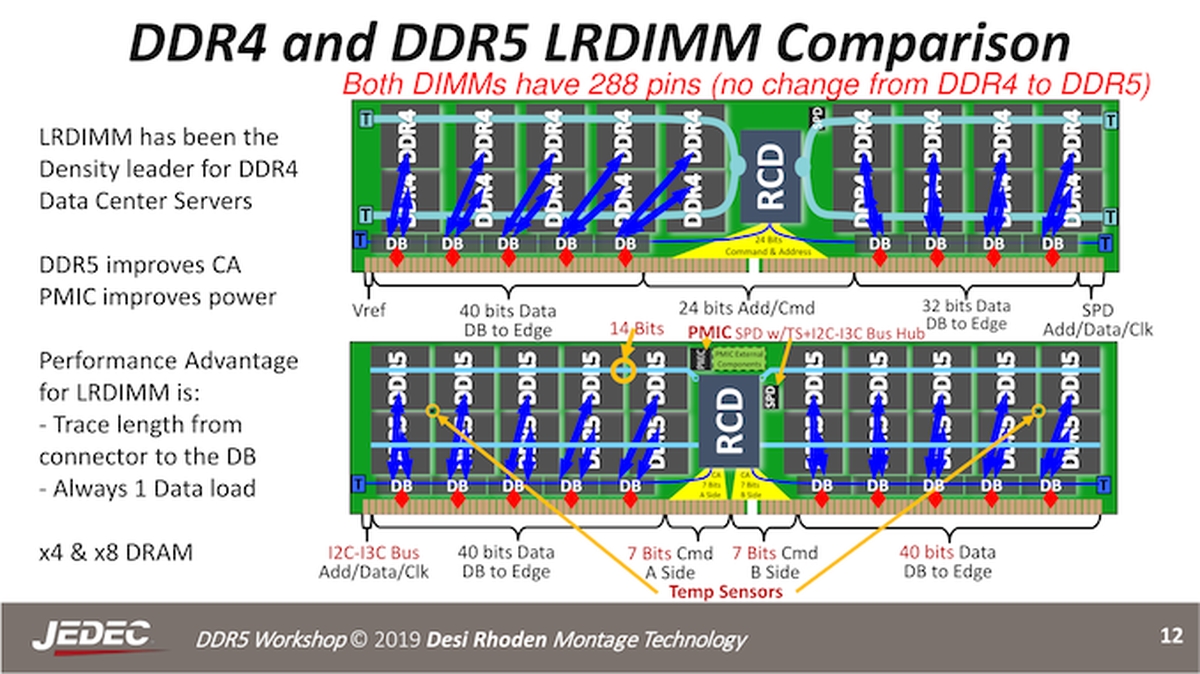 The physical appearance of DDR4 and DDR5 does not change. You will have the same dimension and the notch (to install it on the slots on the motherboard) will be in the same places. Except that the connectors are not the same. Because we have DDR5 which will be in dual channel and the data will not be transferred in the same way. It seemed obvious, but a DDR4 motherboard cannot accommodate a DDR5 strip.

Motherboards that will support DDR5 RAM

We will have to wait for the launch of Alder Lake processors to see motherboards compatible with DDR5 RAM. One important thing is that a DDR5 compatible motherboard can also use DDR4 memory! This is important given the price of DDR5 when it was launched. AMD will also support DDR5 from its Zen 4 architecture and its Ryzen 6000 processors which will be released in 2022.

You might think Intel is one step ahead of AMD, but that doesn’t mean people will rush to the blue brand just to take advantage of DDR5.

If you think that because you just installed a 64 GB DDR5 RAM bar, the FPS of your favorite game will double, then forget about it. The biggest winners in DDR5 will be photographers. Regarding games, their performance has been based on the graphics card which is already in GDRR6 for years.

For 3D rendering and video editing, it is also the graphics card or the CPU that will be decisive. Ultimately, a large capacity of DDR4 will make your video editing more fluid with the Timeline which will load faster. But this will have little impact on the encoding of the scene or video.

Why photography? When using software like Photoshop, you sometimes have to edit a lot of images at the same time, access online image libraries, etc. You have the thumbnails which are generated on the fly. All this information is saved temporarily in RAM! So, when you see the doubling of the frequency, capacities where you can have up to 128 GB of RAM on your machine, then photo editing, but also digital drawing will become a real pleasure.

Of course, other areas like operating system responsiveness, 3D rendering, video editing and games will benefit from a small increase in overall performance. But don’t expect miracles. So you, who already has your finger on the Buy button on this 64 GB DDR5 thinking that you will have 300 FPS on Minecraft, stop right now!

The price of DDR5 RAM will be exorbitant

At launch, DDR5 RAM will be sky-high. For example, the TeamGroup brand posted a pre-order for two DDR5 strips, totaling 32 GB and costing 300 euros. In comparison, 32 GB in DDR4 costs around 160 euros… So yes, when a new technology hits the market, the prices go up.

It is the pioneer who will buy mainly out of passion and then the prices will drop over the years. Our advice is to wait at least 1 or 2 years before upgrading to DDR5. Because on the one hand, the prices will have fallen, the problems with the motherboards will be solved and you will also have a wide choice of new processors whether from Intel or AMD.

But that doesn’t mean you have to wait 2 years to build your new PC. As mentioned, newer motherboards, compatible with DDR5, also support DDR4. So you can buy those new motherboards and the processors that come with them and use the “good old” DDR4 while you wait for the prices to come down.

DDR5 RAM is a qualitative and quantitative leap over DDR4. A phenomenal capacity, frequencies that become insane and all with an energy bonus. On the other hand, the real performance impacts of this DDR5 are reserved for a niche like photography and the introductory price will be prohibitive.

So that’s a good thing, because eventually everyone will benefit from new memory, but there’s no need to rush to buy it on the day it is released.